Over my 40 year career (with 30 more years to go as long as I’m still standing!), there are many patients who I remember. One young man who was married with three children drove all the way from South New Jersey to my office in Brooklyn New York after he heard from a radio interview I had done that I treat bad breath. He had mentioned to his dentist his extreme somber life due to his bad breath. (Please click on link to view our bad breath service page). 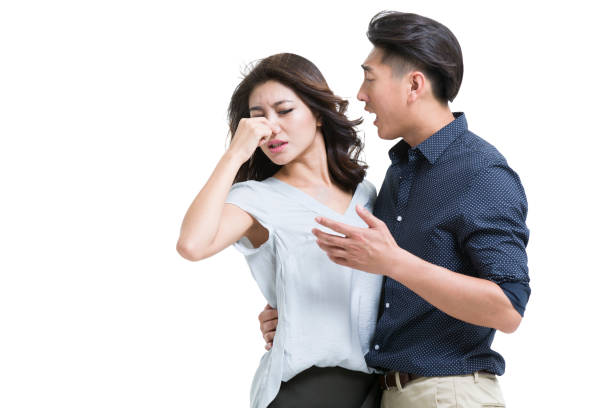 His wife wouldn’t come near him anymore and the Mrs. gave him an ultimatum. Either fix this problem or get out of the house. In those years, Listerine sent all dentists sample bottles to give to patients to promote their product. Even I gave out these samples. Little did we know then that the alcohol in all mouthwashes made the breath worse due to the alcohol content. So imagine you have a bad breath problem, and you use a product promoted on all media outlets and given to you by a dentist, and it made the problem worse!

I was one of the first dentists in the country treating bad breath (many of my colleagues frowned on this as it wasn’t taught anywhere and was looked down upon as a bogus treatment since there was no research around it as yet.) Years later, as research was done and more and more patients were asking for help, bad breath treatment became mainstream for many dentists.

In any case, we tested this man’s breath with a machine called a halimeter (bad breath is called halitosis), so a halitosis meter. The reading almost broke the machine. Unfortunately, when he walked into the office we could smell something was off 100 feet away in the back of the office. Imagine his frustration – he has healthy gums, he brushed, he flossed, he saw his dentist every six months like clockwork, and yet he suffered from bad breath. Well, in short, it took two visits with simple treatment to help John. A year later John called me saying he was still married and had another child.

Another patient comes to mind who came from the Bronx. She was in her twenties and looked like she stepped out of a magazine. An absolutely beautiful woman, who after being seated cried in the chair as she tried to tell me her problem. Could you imagine, she could not get a second date? She could not even many times get a kiss from a date because when her date approached her the guy would back away. Her halimeter reading was not as bad as John’s, but enough of a problem to cause her grief as you might imagine. She as well had two visits and the bad breath was controlled. Two years after seeing her she called and invited me to her wedding.

While not all people are so easily treated, most usually are. Most people we see from around the world have immaculate mouths, are constantly cleaning their teeth, seeing their dentist, etc. and still have a problem. Some people do have gum disease or underlying dental conditions which need to be addressed in conjunction with bad breath treatment to be helped. CNN health department at one time did an interview with me which an airline picked up and showed on their outbound flight to Europe. They showed the video after the usual safety video that prompted patients to see us from overseas on their trips to New York!

If you currently suffer from chronic halitosis, we welcome you to give us a call so we can help you get the good breath you want!