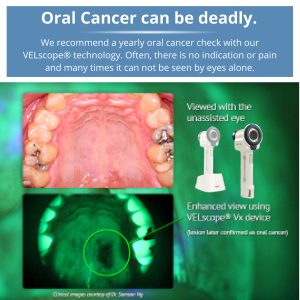 It is a good idea to get an oral cancer screening once per year. As you see in the photo, this cancer is not visually seen by a simple oral visual exam. The Velscope however can detect something wrong under the gums and then be referred to a specialist for a biopsy. We have detected two cancers this year and thereby likely saved our patients’ lives. A simple biopsy was done early and the cancer lesion was removed quickly. As they say “DON’T WAIT till it hurts.”

Close to 54,000 Americans will be diagnosed with oral or oropharyngeal cancer this year. It will cause over 9,750 deaths, killing roughly one person per hour, 24 hours per day. Of those 54,000 newly diagnosed individuals, only slightly more than half will be alive in five years (approximately 57%). This is a number that has not significantly improved in decades.

While historically the majority of people are over the age of 40 at the time of discovery, it is now occurring more frequently in those under this age. The exact causes for those affected at a younger age are now becoming clearer in peer-reviewed research, revealing a viral etiology (cause), the humanpapillomavirus version 16. There are also links to young men and women who use conventional “smokeless” chewing or spitting tobacco. Promoted by some as a safer alternative to smoking, it has in actuality not proven to be significantly safer to those who use it when referring to oral cancers.

If you have any questions about our oral cancer screenings, or to schedule a screening, please call us today at 718-745-3456. Our team is here for your smile!